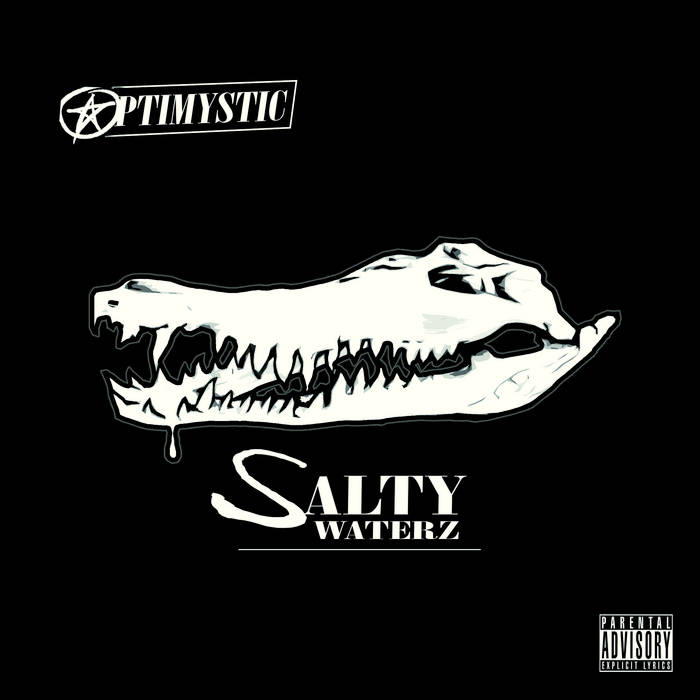 After dropping his monster double album ‘Day of the Guiding Light... Followed by the Shadow’ in 2016, OptiMystic is back to unleash his new beast of an album, ‘Salty Waterz’. A project created entirely out of the desire to produce an album that reminded the passionate hip-hop artist of the music he was influenced by and grew up on.

Besides the plethora of fire-spitters present all over the album, you will also hear some outstanding hip-hop production. Australian beat makers Loftwah the BeatSmiff & Rob Shaker (Syllabolix) hold it down with their strong presence throughout the album. But you will also get a few extra flavours from U.G (US) & Endemic Emerald (UK), making this production team of high hip-hop quality.

OptiMystic puts his Australian stamp on the intro of the album where we find the listener falling victim to a salt water crocodile attack, being dragged Down Under and into the depths of the Salty Waterz, where their senses have been ensnared and drowned out by nothing but that REAL hip-hop!! This album is a NO mumble zone !!
The first track off the album, ‘Force 2 B Wreckond Wid’ is basically an OptiMystic meets some of Boot Camp Clik's finest! An incredible collaboration which has Mic Handz opening the track with an explosive verse. Smif-N-Wessun always deliver hard with their smooth flows and clever lyrics. OptiMystic represents down under hard with his unique universal style. Then you have Rockness Monsta tying it all together with his booming voice on the hook. Loftwah the BeatSmiff provides the grime for the rhymes on this production.
One of the mind blowing things about this album is the first time collaborations between artists, which OptiMystic has orchestrated with executive decision making. ‘Running From Reality’ is one of them, combining Flipmode Squad’s lieutenant Rampage the Last Boy Scout, Onyx’s Fredro Starr & Kali Ranks, who’s addictive hook is delivered all too well over the driving force of Endemic Emerald’s beat.
Then there is the very definitive classic hip-hop sounding track ‘Touch My Skill’ which brings together members of Cella Dwellas, Wu-tang, Onyx & OptiMystic’s crew the Protektahz. Backed by a head banging beat by U.G, this will have hip-hop fanatics breaking necks on a world wide scale.
Mr Mystic displays the respect and love by preserving the culture with the Lost Boyz Mr Cheeks & U.G. from the Cella Dwellas on another U.G. production, ‘Still Reprezentin’. A funky bass driven track that’s guaranteed to get the speakers rattling.
‘Power to the Positive’ brings us to the grown folks table with Wise Intelligent, Chip-fu & Kali Ranks... the incredible song ‘Dreams Alive’ is a sure shot single, and then there is the earth shattering ‘All Handz On Deck’!! A monstrous record which is embedded with two of the wickedest voices in hip-hop... Sticky Fingaz from Onyx and Heltah Skeltah’s Rockness Monsta. Rob Shaker’s beat almost feels destined to have been stomped on by these underground godz !!
OptiMystic has been living and breathing hip-hop since a young age and makes it very clear on the hardcore bangers ‘Hazardous’ (featuring M.O.P & Protektahz’s member JR.) and ‘IBDMC' (featuring fellow Down Under spitter MelloDian & Canibus ) that mumble rap and some of these new crappers have no place in the culture of that REAL hip-hop!
Let's face it... with a feature list like this and quality beats... Salty Waterz is proof that hip-hop lives!! There has never been a hip-hop album like this to be grown out of the Australian soils and reaching out on a world wide scale. The merging of the underground ‘Aussie’ artist with countless heavy weights is unheard of. OptiMystic has put his heart and soul into this project and the hard work has paid off, holding his own alongside many of the greats. The calibre of Salty Waterz is the Excalibur!! Who wanna roll with the salt water croc?!

Bandcamp Daily  your guide to the world of Bandcamp